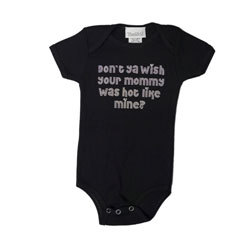 A three-year-old’s summer wardrobe costs what?!?!   Apparently, upscale designer clothing for children is a growing business.  I recently read an article in which several moms were interviewed about their shopping habits for the little ones.  One woman just spent $10,000 on her daughter’s summer wardrobe.  After cleaning the lenses of my glasses and re-counting the zeros, the first thing I asked myself: who brags about spending that kind of money on a toddler?  Gauche much?  I would be mortified telling someone that.  Not that I would ever do such a thing.  I couldn’t even consider it.  Not without dipping into our backyard pony rides budget.

Is it safe to call this fashion allowance socially repugnant?  Especially in the face of our nation’s high unemployment rate and people who are desperate to afford food for their family, or college for their kids, or medicine for their illnesses.  I have one word for these decadent shopper-moms: yuck.

Another woman who was interviewed said $200 Gucci sneakers make her kids happy.  Hellooo−so does the Good Humor Man.  She spends umpteen dollars on her kids’ clothes because “They’re a walking billboard of (her).”  She’s no doubt the designer of the onesie hanging all over Canal Street touting, “Don’t ya wish your mommy was hot like mine?”

It got me thinking about when I was about to have my first child and my colleagues threw me a very lovely baby shower.  I received some lavish baby gifts.  Like a soft pink cashmere sweater from Bergdorf Goodman.  Size 0-3 months.  I remember unwrapping that gift and feeling a pang of jealousy toward my daughter.  Who wasn’t even born yet.  I was nine months pregnant and fatter than a Botero bronze.  It was summertime in Manhattan and a walk outside had me manically perspiring, my clothes clinging to all the ups and downs of my curves.  Just waiting underground on a subway platform could qualify me for a wet t-shirt contest.  (Not in a turn-on kind of way.)  I just wanted to give birth, so I could get my body back and stop wearing clothes that had stretch marks of their own.  Oh, to have a new piece of clothing−that was small−not a dress that could be mistaken for the cover I throw over my barbecue grill.  The teensy-weensy pink cashmere sweater was the most delicate and sweet thing I’d ever seen.  I carefully wrapped it up and brought it home, hoping it wouldn’t be long before my baby girl could wear it.  I had big plans for her cuteness factor.

A week later I had a caesarian section and did not have the bounce back everyone was expecting.  My daughter was born with hip dysplasia which landed her in a full body brace for the next few months.  Her cute clothes didn’t fit over the brace.  She cried most of the day and night from colic.  And so did I.  Neither one of us slept.  It was not uncommon for my husband to come home from work and find both of us wailing.

No one told me it could be like that.  Pain, sleep deprivation, infections, colic, ceaseless, inconsolable crying.  Every time I looked at the pink cashmere sweater I got angry.  Who lived that kind of pink-cashmere-sweater-fantasy?  If I could only get my daughter dressed−some days her diaper was not only her underwear, but her ensemble.  Who would put a dry-clean-only cashmere sweater on a one month old?!?  Dry-clean-only?  On a good day my hair and teeth were brushed, I had a phone conversation without tears, and I took my baby on an elevator ride to the lobby to pick up our mail.  If by the right alignment of stars I could make it outside my building, I would not be going to the dry cleaner.  And how long exactly was my daughter, or any daughter, going to wear a cashmere sweater before spitting up on it.  Okay, my daughter had colic, so she was spitting up with panache, but healthy babies spit up too.  Don’t rich babies spit up?  The kind of kids with $10,000 wardrobes?  Those with layettes of tweed coats with velvet cuffs, crisply pressed blouses with Peter Pan collars, satin dresses (I did not make that up) and cashmere “playsuits” (that either).  Maybe they spit up in designer colors to match their textiles.