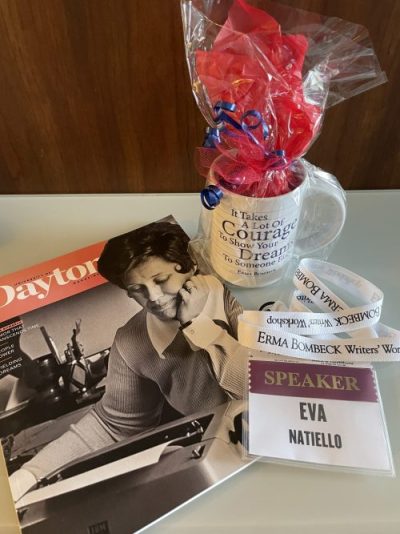 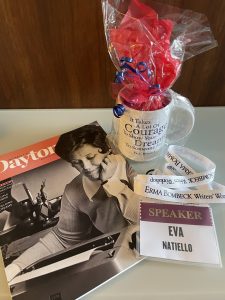 Wow, what a weekend at the Erma Bombeck Writers Workshop ! Last weekend, I attended the EBWW in Dayton, Ohio to teach two classes. It was such a privilege to work with so many talented, passionate and dedicated writers. The spirit of Erma was everywhere. As Erma said, “It takes a lot of courage to show your dreams to someone else.” I saw that courage over and over.

During my first session, The Birds & The Bees of Being An Author, I told a story about a guy I met years ago at a cocktail party who wanted to write a memoir. I asked him how long he’d been thinking about it. He said roughly 10 years. What was stopping him? A lot of things: He didn’t know how to start, where to start, would anyone like it, he feared it wouldn’t be good. All this thinking was paralyzing him. It was snuffing out the very desire to write.

I asked him to hand me his beer. He reluctantly gave it to me. I told him to go to the bathroom and lock the door. Ignore the knocking. Take his phone out and write one sentence. Anything he could think of from the most vivid scene in his mind. It didn’t matter if it was the beginning, middle, end or whether it would ever end up in the book at all. He could worry about all that later. He just needed to start. He unenthusiastically turned away and shuffled toward the bathroom. ten or so minutes later he returned. A subtle grin on his face. “I started my memoir,” he said, almost disbelieving. Then he said “I wrote two sentences!”
We talked about this during the session. The fear. The inability to get going. Act Before You Think, I said. Dive in, think later. Starting is the only goal you have at this stage. Nothing else.
You could imagine my surprise the next morning when one of the attendees saw me at breakfast and said she had great news. She started her book! I can tell you this—when you start a new book at a conference, it’s the greatest souvenir you can bring home! She even read me the first sentence. Now on to the next goal—keep going . . .

There were laughs around every corner. EBWW knows how to stack the talent! I have not laughed so hard in a long time. Or eaten so much cake! First, the incredible Cathy Guisewite, creator of the Cathy comic strip. I’m so lucky to have grown up with the hysterical, relatable and wise Cathy! As a gift for presenting at EBWW, I was given a signed copy of Birth Of A Writer and Cathy was so generous to personalize it. Dion Flynn entertained us with his amazing voices and impersonations and a dark, moving

story. Katrina Kittle inspired us with her publishing journey, Adriana Trigiani, Cathryn Michon, and W. Bruce Cameron lit up Dayton on night #2 and if that wasn’t enough, the combination of Alan Zweibel, Laraine Newman and Wendy Liebman on night #3 had me laughing so hard I nearly peed my pants.

Emceeing this exceptional lineup was (very) funny lady herself, Leighann Lord. While all this was happening the extraordinarily talented Bob Eckstein documented it all with his phenomenal illustrations (check them out on his social pages!). He must have churned out dozens, all perfectly capturing the spirit and energy of #ebww2022.

At the beginning of one of my classes, someone approached the stage and silently handed me a card with an illustration on it. I said, “what’s this?” and looked closely. Then it hit me. “Are these the twins!?!?!” I asked. I was referring to the twins from my first book THE MEMORY BOX. To that she replied, “I don’t know, *are* they twins?” Which sent a shiver down my spine. (You won’t know why unless you read the book. Just saying.

I gotta say, being an author is pretty cool (. . . some days

). When a complete stranger creates an illustration of a scene from your book to give you, it leaves you pretty speechless. But also, wanting to run home and write more books.