The Cicadas are Here! (Now leave.) 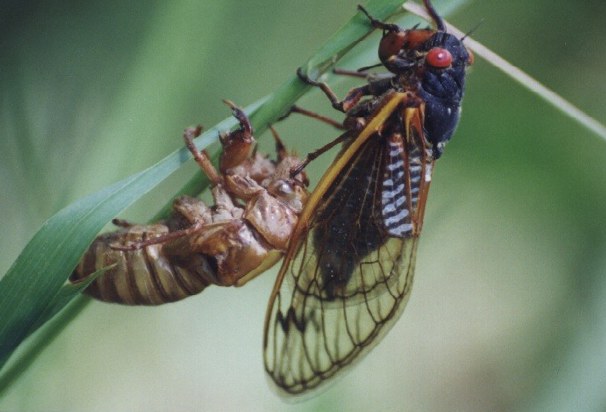 Seventeen years ago−the last time the Periodical Cicadas reared their creepy, red-eyed heads−I was living in New York City. I’ve existed, my entire life, unaware of this species of critter. All that has changed. Now I live in New Jersey, and when I heard that the “cicadas were coming,” I had mixed emotions.

First, to be honest, being the true skeptic that I am, I didn’t believe anyone’s cicada stories. Most people are inclined to exaggerate. (In fact, no one’s more inclined than I am!) All this talk about “millions of them” “swarming in massive cyclones before your eyes” having “cacophonous” mating calls.  (Well, cacophonous was my word, actually.)

Puhleeze. Calm down folks! We’re talking about a bug here!

Others warned that I’d need to “bob and weave” them while walking down the street, that the “crunch underfoot” was impossible to avoid, and sweeping sidewalks would be a nightly chore, creating “snow drifts of carcasses” left to die and stench.

I’ve learned two things thus far: exaggeration is annoying, and I only have tolerance for my own. And, as it happens, no one was exaggerating.

Once I was assured of their arrival, because I began to see them with my own eyes, I became mildly excited. I’m typically curious about nature. The hows and the whys of evolution and the survival of the fittest and all that jazz. I was prepared to be fascinated. They come every seventeen years and produce high decibel mating calls from on high in trees, and suck the moisture from plants and pee like rain and have five eyes and shed their skins and leave their little jackets all over the place like my kids! Heck, they sound like performance artists! I was practically tingling with anticipation! Then they mate and produce scads of holes that blanket the lawn to return to their burrows for seventeen years, yards below the ground. If that’s not sci-fi enough for you, I don’t know what is. Hmm, that had me wondering, could they be a life form from another planet here to enlighten us? Just as my curiosity was peaking, my cicada-savvy friends were in a tizzy. I giggled at their hysteria and silently scoffed at “They’re here!!!” announcements of panic.

It’s a bug, people. What the heck?

It’s been approximately four weeks since they’ve arrived and−I’ve had it!

Their deafening serenade is not enchanting. It wakes me on a daily basis just after midnight. And annoys throughout the day until dusk. Contrary to my initial impression, having five eyes is not cool. Especially since they’re not used effectively to avoid flying into my face, my eyes, my hair, my mouth, my house. There is no allure to the hundreds that are covering my yard furniture. The stench coming from heaps of dead carcasses is not stirring any sense of wonder and I no longer think it’s amusing to get urinated on by cicadas overhead in tree branches. If they do in fact turn out to be an alien life form, keep it to yourself−I don’t give a crap.

Today, as I stood at the top of a ladder, clipping a holly in front of my house with electric hedge trimmers, I almost pruned my head off my shoulders. A bat flew out of the shrub and got tangled in my hair! Okay, it wasn’t a bat, it was a cicada. But the shadow it cast on the side of my house was ginormous. And when I tried to flick it from my hair, the zizzing blades of the hedge trimmer came dangerously close to my neck! I nearly fell off the ladder! And plunged to my death! (Okay, I’m exaggerating.)

I’ve had it with these stupid bugs.

Leave town, cicada! You don’t live here! I do, and you’re bugging me! Go home!

And by home I mean six feet under.

Which I’d be happy to arrange.

On a Facebook writers group I’m a member of, someone started a discussion by asking who among us were Indies, who were traditionally published, and who were “authors in waiting.” I suspected the term “author in waiting” to be someone with a completed manuscript who was waiting to either secure a literary agent, or a […]