Gettin’ Jiggy with the Grid 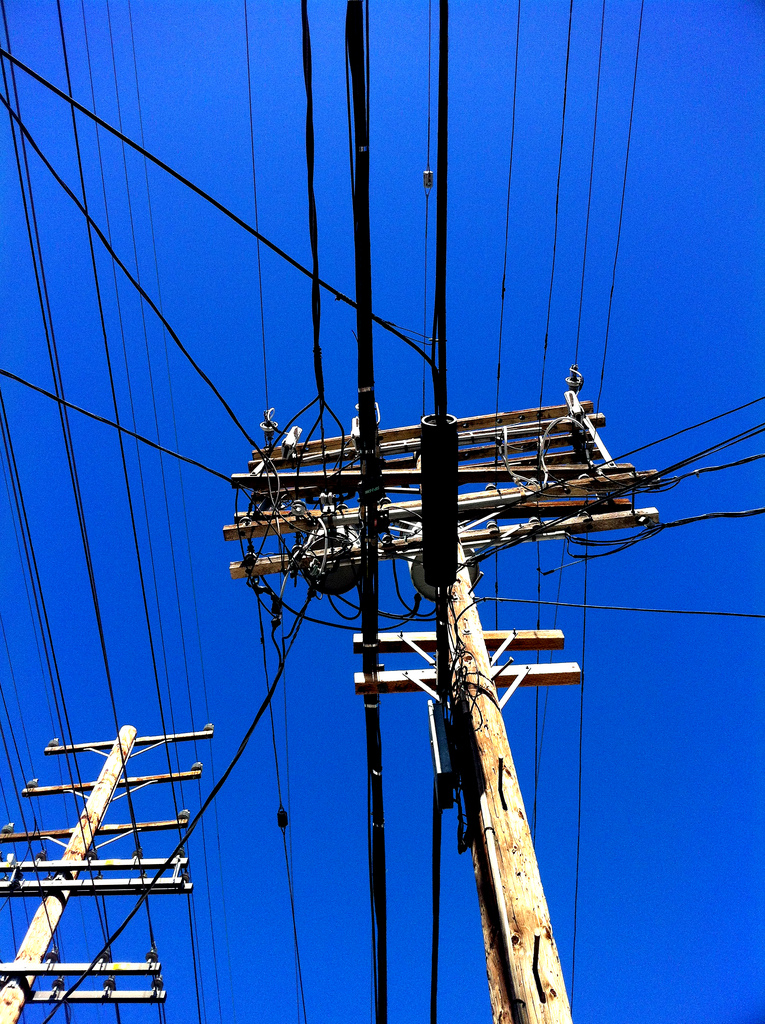 I know losing phone and internet service for thirteen days, twenty hours and six minutes, is not a big deal in the scheme of things. As it turns out, getting it restored is. But they don’t call me Jenny from the Grid for nothing!

After speaking with a Verizon phone agent, who troubleshot remotely, she declared our problem an equipment issue and arranged to send team #1 (as we’d eventually call them) in three days with new devices.

Team number one, the “inside guys,” went directly to our basement to check out the Fios box and more specifically the flashing lighted buttons. Two greens and one red. “That’s good,” said Inside Guy. I was elated.

Inside Guy assured me this wasn’t an equipment problem at all; it was an “outside” problem. Fearing the inevitable−that the “inside guys” couldn’t help with an “outside problem,” I started to grovel. “But can’t you just take a look outside? Did I tell you that my neighbor’s Fios is working?”

He agreed to take a look. Minutes later my doorbell rang. A fallen tree down the street snapped an electric pole, into which all the Fios lines feed. The “power people” needed to call the “tree people” to remove the tree, allowing the “power people” to revive the pole. Then, and only then, could the Fios “construction guys” attend to the wires.

He chuckled a little at this, then reassured me that they all keep in close contact and it wasn’t necessary for me to call anyone or even worry. The next time I’d pick up the phone it would be to the sound of a dial tone. He told me how lucky I was. The mere involvement of the Verizon guys meant that the “power guys” would make this pole repair a priority. Hence, power would be restored much faster.

After I told my neighbors that power would be back imminently, due to my call to the Fios guys who in turn would ratchet up our power restoration with a call to the “power guys,” I received a text from Verizon: “your issue was resolved and ticket is closed. Thank you for using Verizon.”

I was apoplectic. I spent the next three hours alternately on hold with, and disconnected from, Verizon to reinstate my request for a repair.

The next day my neighbor down the block called me and said a Verizon truck was on our street. I sprinted to her house in my pajamas and down vest. Three guys wearing hard hats huddled on the curb; one of them agreed to “take a look” at my situation.”

“Do you want to look at the box in my basement?” I felt myself batting my eyes.

“Can’t do that, ma’am. I’m an “outside guy.” I only look at wiring from the house to the grid.  If your equipment’s good, must be the wires.”

“But my neighbor’s Fios is working,” I insisted.

“Well, something could be broken inside the wires. We need to test the lines to see where the signal is off. ”

“Oh, thank God you can test them.” Finally, a doer.

“No. I’m a “construction guy.” All you need is some guy to go up that pole and test the feed.

“You might just need to jiggle it.” Then he took his index finger and did something that I won’t try to explain. Let’s just say it made me uncomfortable enough to whip my head around to see if any of my neighbors were walking their dogs, watching this guy with his finger, talking of “jiggling” to me in my pajamas.  “Sometimes it’s just a plug in the grid that needs a jiggy.”

I was exasperated. A “jiggy”?!? For Pete’s sake. If it turns out to be a jiggy! I was desperate to ask this guy if he would be the one to jiggle it.

But I just couldn’t.

Anyway, he already told me he wasn’t my guy.

I needed the guy with the tool.

He called his supervisor and relayed my house number, then said, “I’ll tell her you’re sending him over.”

The “construction guy” assured me the splicer was on his way; then he wished me well. I watched him walk up the street toward the other hard hat guys and wondered when, or if, I’d ever see my guy.

I waited by the window for the “splicing guy” with the tool. He had my number. My family tried to lure me into the kitchen with ice cream (power was back), or to watch the new episode of Project Runway All Stars (we had limited tv service). But I needed the internet. I was prepared to wait. After a while my husband found me, “You’re still waiting for him?” He turned and mumbled to himself, “That’s not gonna end well.” I wasn’t moving till he came.

The next day I took my kids to school after ten days at home. I had some storm chat with other moms before getting in my car, at which time my cellphone made “you of a missed call and have a new message” beep. It was the “splicing guy” telling me he was at my house but no one was home so he left.

On the fifth day, a Sunday, the doorbell rang. I was in the kitchen with my daughter and I said to her, “Pray it’s the Verizon guy.”

I opened the door and who did I see? With outstretched arms, I cried, “It’s you!!”

He looked over his shoulder, then tentatively said, “Me?”

He remained silent. And, a little apprehensive. Caution was in his eyes. Or maybe he was just tired. He went to the basement, and then outside, up the pole, down the street, up that pole, back to my house, down the basement, and when he came back up he said, “It was an equipment problem. Bad box. Must have blown out in the power surge. Anyway, there’s a new one down there now. Everything’s live. You can check it before I go.”

My jaw dropped. Could it be true? Or would I be falling for another Verizon guy’s line?

“Do you want to check?” He said again to jolt me.

So I did. And discovered the unimaginable. My emails! And Facebook! And Twitter! I was stunned. Could it be true? Did Justin and Selena really just break up? As I thanked the Verizon guy for bringing peace back to our household, I couldn’t help but wonder. Who was this man? Who sent him? How did he find me? This un-earthly creature who asked nothing of me. But gave me everything. Phone service, internet, the ability to DVR! A new box even.

And never asked me to jiggle a thing.