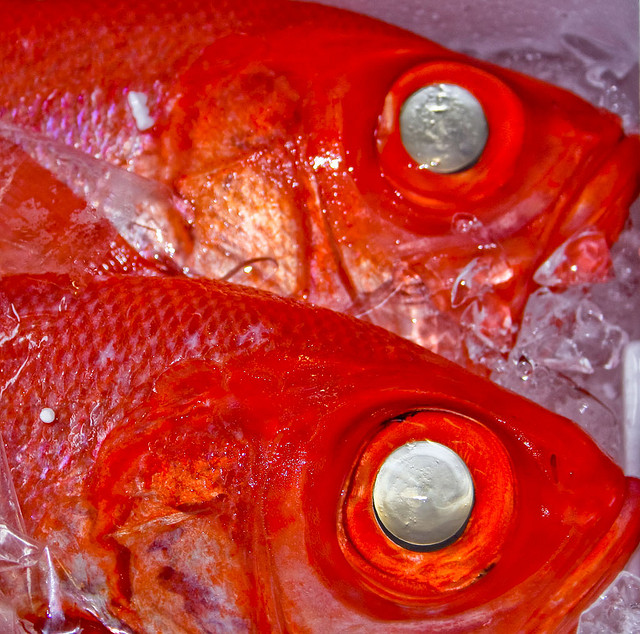 It’s pretty clear. Over-fishing is a present danger to our worldwide oceanic ecosystems. Scientists estimate that all marine life will be gone from our oceans by the middle of this century if nothing is done to protect the sustainability of seafood. Up until now, we didn’t have a solution to this dire issue. But here it is−if we want over-fishing to stop, there’s only one thing left to do. And it’s a no-brainer. We need to assemble a group of celebrities to pose nude while straddling, stroking or canoodling dead fish. Then take their picture.

That’s exactly what’s been done with a group of super-committed naked famous people. The photos are shot by Fishlove, “an ongoing photographic project that invites well-known personalities across the globe to make a bold [and cold!] stand to stop over-fishing.” Do you have a better idea? I didn’t think so. Did Fishlove’s strategy make you toss your fishing pole? How ‘bout the tuna sandwich you ate for lunch?

Side note: scientists, at this time, are running the analytics to confirm early evidence that there’s a direct correlation between the number of naked luminaries photographed with dead fish between thighs, octopus tentacles dripping off torsos, and starfish accessorizing exposed breasts, and a decrease in over-fishing.

Lizzy Jagger, the daughter of Mick and Jerry, has posed for a series of these photos in which her nudeness is entangled with the fins, tails and scales of no-longer-breathing underwater creatures. Even Jerry gets her model on and takes off everything else to pose with her daughter−their hands seductively up the gills of two once-exotic lifeless fish. Most of the “models” featured are British. You may or may not know them, but after seeing these photos there will be little left to know.

My first thought was…well, let’s go to my second thought. Are these photos supposed to discourage the fishing of fish, or the eating of fish? If the purpose of Fishlove is to support fish sustainability, shouldn’t they have photographed the nude celebs under water, swimming with the wildlife? As if to say, “You go, fish! Live on and procreate! We don’t need to take you from your natural habitat and subject you to a photo shoot where your scales will be color-enhanced and you’ll be sprayed with shiny polyurethane so you look flawless and beautiful and tall and skinny! And dead inside! And fake!” (Unfortunately, that model’s photo didn’t make the final cut−she had to “take another job” at the last minute.)

Side note #2: Lizzy Jagger’s mind may be on fish, but her hands need to get around a cheeseburger.

Learn more about the urgent and drastic state of marine life and take a look at the photos here.

Side note #3: According to Fishlove, all fish used in the photography were “caught sustainably.” Couldn’t they have carved them out of tofu?

When I first saw a magazine story a few years ago about Little Free Libraries, before I read it, I jumped ahead to look at the photos. Yes, it was true. For the most part, they were no bigger than an apple crate. (With a roof!) The cutest things you’d ever seen. Maybe I’m just […]

It is so true that a reader’s takeaway is very individual. We all get something different from the books we read. Mainly because it connects back to our personal experiences, both positive and negative. Some people choose the act of reading as an escape from their daily life, or for pure entertainment, or […]