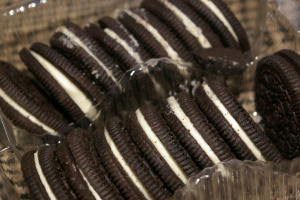 It’s time we admit that Writer Separation Anxiety is a bona fide disorder. I’m not ashamed to say I have it, maybe others will come forward. Remember, there is strength in numbers. It may not afflict the majority of writers, but that doesn’t make us freaks. Why do you think there are so many sequel writers?

It’s true that most writers are ecstatic to finish a manuscript. However, when I wrote The End of my novel, I was bereft.

What would become of Caroline, Andy, Lilly, all my characters? We’d been together for so long. I spent more time with them than my real family. What would I do now?

That first morning after The End was the hardest. Time to get reacquainted with my LBTB (Life Before the Book). During the manuscript’s third edit our kitchen became depleted of anything edible. Grocery shopping was now long overdue. A chore would be good. It would keep me busy. No time to pine.

At the store I strolled down the cookie aisle. Bad idea. There were Oreos everywhere. You can’t dodge a cookie with 17 varieties. I told myself to stop thinking about Andy, he’s not real. Oreos were his crutch food. The night he and Caroline got into a chandelier-trembling argument (Chapter 6) he ate 2 sleeves of Oreos with a quart of milk. Any other guy would’ve gone out and gotten bombed with his buddies. Not Andy; he plopped on the couch (which he’d later sleep on) and ate 28 cookies. I hated that night. I hated when they fought. A friend of mine accused me of being secretly in love with Andy. Which is complete hogwash. I’m married!

I spun the grocery cart around and headed to frozen foods. I’m far less emotional when I’m cold. My internal voice said, “Cheer up! Celebrate! You finished your first novel!” Right at that moment I found myself smack in front of the Carvel Cakes. A sign! Clearly, a celebration was in order. I felt better already. In fact, I started whistling−which I often do when I’m happy (or need a bathroom). Then I recognized the tune: My Favorite Things from The Sound of Music. I gasped. The very song Caroline hummed on that disastrous night (Chapter 10). If only I could’ve helped her.

Grocery shopping was not going as planned.

I paid for the cake and pimentos and skulked to my car. My phone rang. It was my son. Thank God, a real person to focus on. “What’s the matter Mom, you sound awful.” I tried to stay light and breezy but I choked up. “Mom, it’s okay to miss them. You’ll be alright, remember when Caroline thought she was having a nervous breakdown−”

Before I shifted the car in reverse my phone rang again. It was my husband reminding me of our neighbor’s party invitation. We declined because I thought I’d still be editing. “We should go,” he insisted. If I wasn’t having fun, at least I could eavesdrop and steal mannerisms and quirks from people to use for new characters. That sounded amusing!

It felt good to wear decent clothes and eye shadow for a change and rekindle with the neighbors−laughing, swapping stories, exchanging recipes. Was it wrong of me to give them a deviled egg recipe that Caroline’s mother, Elaine, kept secret (Chapter 14)? Somehow she’d never “remember” to tell people about the chili paste. That always made me laugh.

Boy was I out of touch with current (past) events of our town (world). A neighbor’s sister miraculously recovered from a near-fatal illness. Everyone reveled in this news−then mid-hoopla, their eyes, with scrunched brows, turned my way. Ripples of “Are you okay?” spilled over me.

I wasn’t okay. “It’s just that Caroline’s sister wasn’t so lucky−” I tried pulling myself together but instead became defensive and blubbered, “…she’s dead.”

My sniffling intensified under a chorus of “Oh my gosh” and “I didn’t know” and an exchange of incredulous glances. Someone asked, “Who’s Caroline?”

My head shot up. I spurted like a broken carburetor, “My protagonist!”

It was time for me to go. I insisted my husband stay. I needed to be alone.

At home I sat in the chair that supported me for all those months (years) it took to write my novel. I lifted the manuscript and inhaled deeply to smell the paper and ink. I thought about Caroline, Andy and Elaine, the kids. The triumphs and disasters. It was time they moved on without me. Me without them. They’d enriched my life in so many ways. I’d always have that. I put down the manuscript and picked up a box of Oreos.

Time to ponder a sequel.