How I Forgave Jamie Oliver 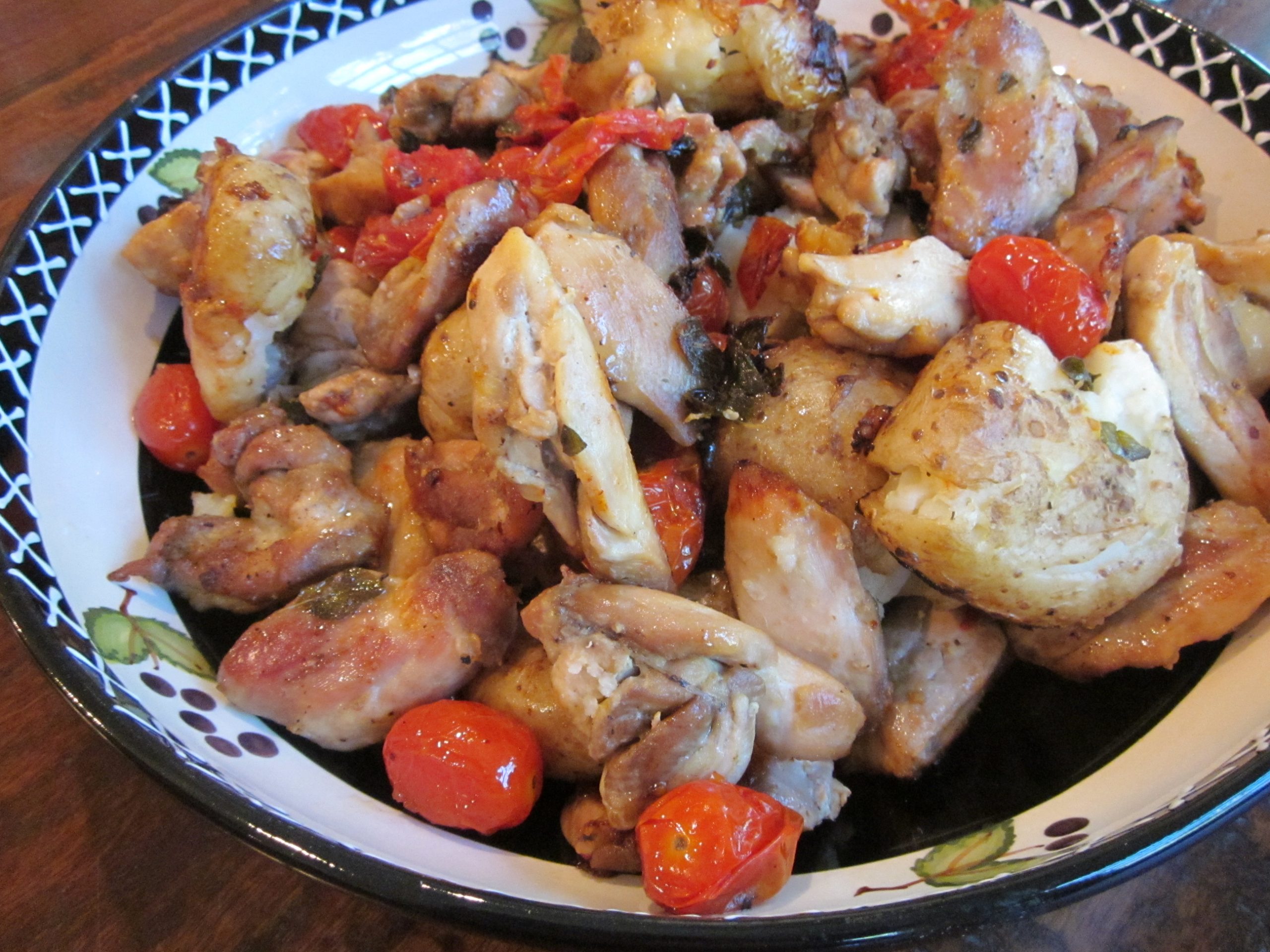 If you have the time and the patience, and room in your heart to forgive chef Jamie Oliver for referring to his Crispy and Sticky Chicken Thighs with Squashed New Potatoes and Tomatoes as a “simple pan-baked chicken dish” then I encourage you to try this recipe.

But for God’s sake, know up front that it is not “simple.” Okay perhaps, technically, it is “simple” but “simple” implies “quick.” Doesn’t it? To me it does. And quick it is not. The time alone that it took to de-bone and trim the chicken thighs of the cheesy fat clusters could have driven me to chase Mr. Oliver through his English potato garden with a pair of kitchen scissors. To say nothing of the time-consuming tedious task of individually stabbing, then peeling the skins off all those little cherry tomatoes. Peeling skins!

I typically have a rule in the kitchen never to cook anything that takes longer to prepare than it does to eat.

But alas, if I had stuck to that rule I would not have experienced this glorious masterpiece. Could I have skipped the tomato disrobing? Yes. But then I wouldn’t have tasted how “lovely and sweet” the tomatoes become when cooked stripped to their flesh, and the claim from Mr. Oliver that “their intense flavor will infuse the potatoes.” And after all, “Sometimes in cooking, you know what, it’s not all bish-bash-bosh, you need to put a bit of love in it, a bit of care, and it will taste fantastic.”

I got seduced into preparing this dish after seeing an episode of Jamie at Home. He looked tenderly at his ingredients, calling his potatoes “darlings” and “underground jewels.” Everything was “lovely,” from straining veggies to surgically removing the bones from chicken thighs. He even urged viewers to plant potatoes in their own backyard, claiming they’re super easy to grow and there’s nothing quite like using “freshly dug” potatoes. I’m sure he’s probably right about that. Though I have some pretty solid experience using potatoes which are weeks old−in fact, they’re one of the only vegetables that will last and last, even after they’ve practically grown a clone of themselves right there from their own skin. But maybe I should keep that to myself.

There was something charming about Jamie Oliver serving messy portions of his meals into chipped plates and pottery. And the sight of his charming country kitchen, a busy affair with brick walls and jelly jars cluttering counter tops and stacks of dishes and terra cotta, shelves practically leaning to one side. No granite or marble in sight. Not a stand mixer or cappuccino maker to be found. This cozy setting shouted “You can do this too! You American Food Network viewer, sitting on your overstuffed couch in the suburbs!”

Yes, he was talking to me. Thank God I was listening.

He told me to take the fresh oregano and “bash it up a little. Smash the oregano for butt-kicking flavored oil. You can’t chop it up and be nice about it.” It felt so comfortable, the spills and the clutter, the ruffled shirt. It was like I was cooking in the kitchen with my younger brother, if my younger brother could cook. (Of course you can cook, dear! That was just a little joke!) Did I mention the adorable English accent? Who can resist someone who pronounces oregano with the emphasis on the third syllable? Certainly not me.

I can’t explain to you why or how it happens that a mere six ingredients can produce an aroma transcendent. It leaks from your oven door when you least expect it. When you’re not even in the kitchen! You’re upstairs folding the laundry and bam! It finds you. And you go a little weak in the knees. Oh my gosh, you think to yourself, is that coming from my kitchen, from my oven?

Thank you, Jamie Oliver. I forgive you.

Hey Pie Lovers! I know you’re out there—and I’ve got some news for you. February is National Pie month, so what better way to celebrate than at a book store pie contest! Do you bake a mean pie? Or maybe the mention of pie gets you dreamy eyed and salivating? Join me and the Farm […]

Even as I type out that headline, I can’t believe it. My modest self-published thriller—who would’ve thunk it? The thing that caused years of frustration and disappointment is now responsible for  unexpected squeals and ripples of joy. To mark this occasion, I recently sat down to answer some of my most frequently asked reader questions. […]

Someone said this to me the other night at an event I attended for people who have consulting businesses. This guy is a consultant with a compelling personal story, and he’s been told numerous times that he should write a memoir. Earlier in the evening, I told a group of people my own professional […]