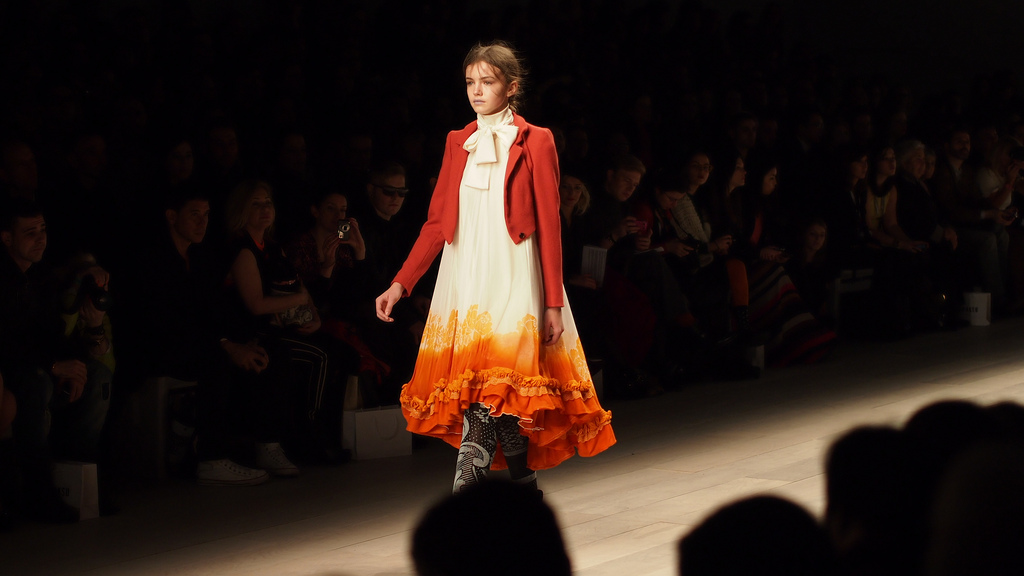 The fashion industry might’ve been in typical panic mode, but this year the  Fall Collections were smack in the not-so-flat belly of the most serious flu epidemic in history. While designers oversaw the final stitches and selections, models were dropping like busty mannequins due to influenza. This prompted a handful of clever designers to nix the bug with their own personal brand of achoo-voodoo.

Side note: to protect my sources, names will not be disclosed.

If you saw Designer #1’s show, you’d swear you had lied your way into the Cirque Du Soliel tent by mistake. Don’t let the nymphes vertes fool you; it was actually the debut NY show of one notable European designer, who winked to his newcomer status by dipping his models in green from head to toe. While some think he procured tubs of Smash Box Fern, I’m here to report otherwise. This clever designer discovered (by way of his Alsatian great-grandmother) that Absinthe’s stiletto-high alcohol content kills cold and flu germs on contact. Mix a little Absinthe with the adhesive used for fly strips, paint this concoction on the limbs of models and voila! You’ve got yourself a human germ trap. Bravo Designer #1!

What if models are already sniffly? Ask Designer #2 and she’d say: voluminous sleeves. Where else they gonna tuck those tissues? (#obvi.) While traveling for inspiration for her upcoming line, in the Uttar Pradesh region of India, this designer went mad over the abundance of peppermint and menthol, specifically for its varied medicinal benefits. She couldn’t get her hands on enough menthol crystals to bring home to NY. (Unfortunately, since the airline allowed only one carry-on, her supply didn’t last long once metro-side.) Sadly, the folks at Duane Reade are unfamiliar with menthol crystals, so Vicks Vapor Rub will have to do. A bit fortuitous, as she resourcefully discovered when creating the makeup look for her runway models. Unable to locate a tube of M.A.C. Lipglass, she insisted the makeup artist try Vicks Vapor Rub swiped across lips. Not only did it create ice-like shine, it doubled as a super intense nasal decongestant! No cold’s gonna stop her show. #boom. Hey, all you sneezy ladies, Gesundheit!

You may have read about the fashionistas’ current obsession with hand sanitizer (as pedestrian as that might sound). One accessories designer, #3, inspired by her #sociallyacceptableaddiction, commissioned a master Murano glassblower to create vibrant-chic amulets filled with this bacterium-buster, strung on satin cord making it exceedingly wearable. I’m told that when these mesmerizing trinkets caught the light of the cameras’ flash on the runway they became dangerously hypnotic. (#oops.)

To ward off flu juju, Designer #4, the Woody Allen of the fashion cosmos, doled out a daily dose of schmaltz to his staff and models. It’s not exactly clear who makes the huge vats of this thick gelatinous rendered poultry fat and bottles it for the office, but swirling rumors point to his mother. The secret to “her” schmaltz is the minced cloves of raw garlic that go into every shot glass (served with a spoon). The fact that so many models scramble to work for Designer #4, even in the midst of cold season, is a testament to their love and respect for this fashion genius (#mamasboy). Anyway, some of the girls say it’s not too bad after a couple Gailoises. (How ‘bout a shot of Schnapps? I’m just saying.)

Designer #5, of all things haute couture, has always preferred the bold, pull no punches approach and chose to send her models down the runway wearing white paper surgical masks. À la Michael Jackson. Her supporters say it was fashionably irreverent and shouted “I like me!” Others say it was infinitely more modern than last season when her models walked with their head’s stuck out of toilet seats.

There you have it! NY Fashion Week in all its chafed-nose gloriousness! If you found yourself getting caught up in the fever, shivering with excitement and aching for more, call your doctor, you sound terrible. (#purellanyone.)