Advice Martha Stewart Gave Me On Living and Lemons 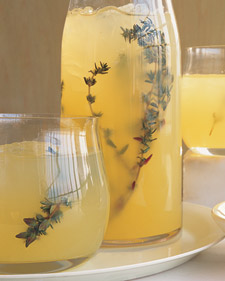 I have a confession to make. Years ago, I was semi-obsessed with Martha Stewart. “Semi” in that while I did drive past her Connecticut farmhouse, I didn’t peer through her windows with binoculars (forgot them at home) to see if her magazine living room was in fact her real living room. I did collect every paint chip from her interior paint line, I attempted (or planned to, or fantasized about) every craft project and Good Thing, and to this day I own many years’ worth of Martha Stewart Living magazines, mostly the mid 90’s through the early 2000s. I ate up her advice like whipping cream, the essential rickrack, frosting windows, cornhusk crafts, pressed seaweed, chintz, decoupage! Tomato aspic! Don’t know what half those things are? Just wait!

The one thing I rejected like curdled goat’s milk was a monthly feature called, Martha’s Calendar−her personal daily to-do list. It was mostly chores and house maintenance tasks that “she” planned to do and wanted to remind others about. Who needs Martha Stewart to nag them about doing drudgery? That’s what family is for.  Plus, her to-do list was a far cry from the rest of ours. Did she intend for this to be a peek into an elitist farmer-collector-decorator-entertainer lifestyle or was she trying to inspire? It ran for a short time. After all, who but Martha Stewart has winter and summer curtains to switch in and out?

I recently had the urge to pull out a vintage MSL, and fell upon Martha’s Calendar with the same fascinated voyeurism I had years ago. Here is a compilation of some of the best Calendar entries. I’ve provided a handy-dandy how-this-might-apply-to-your-life translation.

April 1, 2001 – Count canaries. This was a stumper. Martha owns canaries, but doesn’t know how many? That’s a lot of canaries. But why count them? The closest thing I have to birds is a roast chicken in the fridge and a down pillow for overnight guests. Tally: approximately 2.

April 4, 2001 − Sow tomatoes in greenhouse. Plant herb seeds for a clay pot herb garden. If they don’t germinate, buy small herb plants from Home Depot. If they die, buy basil at the grocery store. If you’re too busy counting canaries, use the dried stuff.

April 8 – Organize linen closets. Be happy you have clean linens and go make a terry cloth rug out of old towels!

April 10, 2001 − Open pools in Westport and East Hampton. Order a Slip ‘n Slide from Target.com. Have it shipped in time for Memorial Day.

April 1, 2001 − Take final test for pilot’s license. Hmm, another toughy. If you want to feel like you’re flying, go get some dental work done and ask for the laughing gas.

December 13, 2002 – Wash all light bulbs. If you have the time, desire or inclination to wash your light bulbs, you have bigger problems than I can help you with.

January 22, 2003 – Rotate mattresses. You’ll need assistance for this, so be sure to ask your husband 3 days in advance, so when he says, “I’ll be right there,” it’ll be done exactly when you intended.

June 8, 2001 – Clean behind washer and dryer. Barring the possibility that you are a contortionist, weight-lifter, or wizard, let the dust bunnies be and go decoupage a side table!

August 19, 2001 – Go rowing. Here’s one you need not feel guilty about unless you have a canoe, some oars and a body of water handy. Hey, if water is handy, consider making pressed seaweed art instead!

April 17, 2000 – Clean chicken coop. …I guess you could clean out your refrigerator…another job I dread. My rule: never clean anything that’s bound to get dirty again. Waste of time. Instead, take all the cheese and veggies you have in there and cobble together a sumptuous quiche!

Apirl 2, 2002 – Climb Mount Kilimanjaro again. Again? That sounds pretty boring. Decorate a wall with a bunch of empty mismatched tag-sale frames. Nestle some smaller frames into larger ones for a fabulous effect! (You’ll need a step ladder to get some frames up high. Be careful, the air thins out up there!)

April 6, 2002 – Take down and wash storm windows. Come on, Martha−we know you’re not doing this! Skip the windows and make a gorgeous lampshade out of sheets of birch bark−beautiful when light shines through!

April 7, 2002 – Scrape and paint chicken coop enclosure. Enough with the chicken coop! Fix yourself a Vodka-Thyme Lemonade and be thankful it’s someone else’s urge to raise chickens.

November 13, 2002 – Wash cats and trim claws. Oh, a cat bath sounds fun and easy! Everyone knows cats love water! Remember, “claw” is a noun and a verb. My advice: get used to the way the cat looks and smells. With the time you’ve saved, make a Grasshopper Pie−Martha’s recipe is to die for. And watch your family’s claws come out!